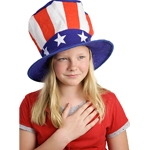 Various activities were organized to celebrate Independence Day. Parades, family activities and concerts were a part of the Independence Day celebrations. Fourth of July being a national day and a federal holiday, brought together all the people of the United States.

Apart from all those leisure activities, USCIS planned special naturalization ceremonies. 4,000 immigrants are new American citizens after taking the Oath of Allegiance. Becoming American citizens is the dream of many immigrants who are permanent residents in the United States, for many years. The special naturalization ceremonies helped such immigrants to achieve their American goal, by allowing them to become citizens of the United States.

The parents who were once immigrants, became US citizens through the naturalization process before their children turned 18. 14 children of such naturalized US citizen parents were provided citizenship certificates, as a proof of their legal status in the United States as US citizens. USCIS field officer of Sacramento, Michael Biggs said that the citizenship certificates given to them are important identity documents, like a passport which they must possess forever. The certificates given to the children contained a passport-style photograph with other information including their name, country of origin, date of birth and the alien registration number.