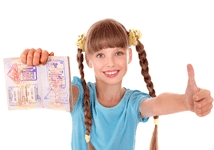 The visa bulletin published by the United States summarizes the availability of immigrant visa numbers. The diversity visa lottery which is conducted under the 203(c) of the Immigration and Nationality Act, offers 55,000 permanent resident diversity visas every year. The visas are allocated to people hailing from countries with low admissions to the United States over the past five years. 5,000 visas out of the 55,000 visas allotted for the DV lottery program will be issued under the NACARA program. Hence, 50,000 diversity visas will be offered through the Green Card lottery program and these visas are divided among six geographic areas. According to the allotment, each eligible country will receive no more than seven percent of the diversity visas made available in a year.

For the month of August 2012, immigrant visa numbers for the DV-2012 applicants who are qualified are current. Selected applicants may not make any claim or derive any benefit from their DV lottery registration after the last date of the program, September 30, 2012. The visa numbers may exhaust even before the end of September 2012. This also applies to the eligible dependents of the principal applicant. They will be entitled to derivative status only until September 30.