A side by side comparison of October 2011 and October 2012 shows a 59% increase in received immigration applications. Surprisingly, the percentage of applications denied has not increased, but rather the backlog has grown. In 2011, the number of pending applications was 1,810,462 compared to 2012 where it sits at 2,202,170 – an increase of 22%.

What this means for immigration applicants? Apply now for a green card or prepare for longer processing times in the future. Some immigrant categories, particularly lower priority family preference visas, have backlogs of several years. However there are others, such as in demand EB employment visas, which are processed more quickly. 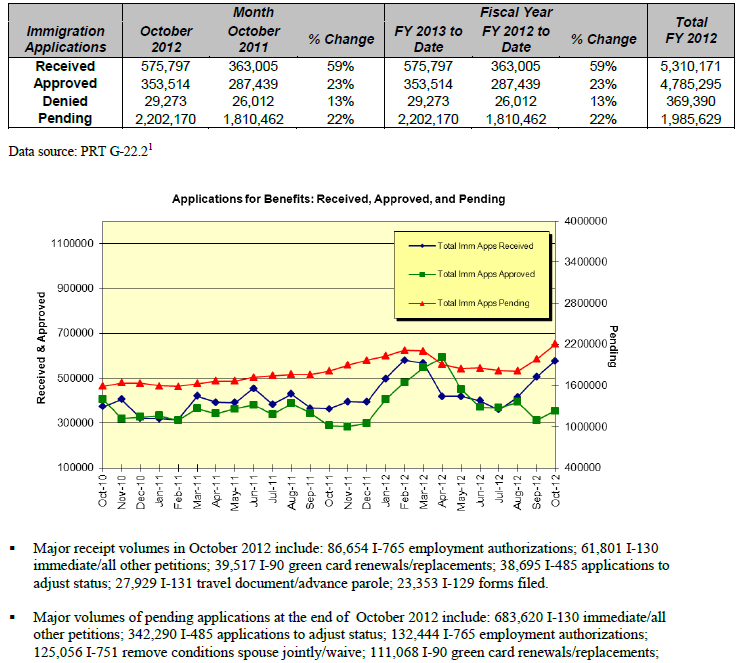 What is a Backlog?

All immigration visas are restricted by yearly quotas (fiscal year), except IR visas which are unlimited and are only available for immediate family members of U.S. citizens. For example, the yearly quota for the U visa is 10,000 meaning that once the quota has been met – 10,000 U visas have been issued – all other applications will be pending until the next year. The group of pending applications is referred to as a backlog.

Wait for a Visa Number to Become Available

Because there is a cap on the number of visas allotted for each category, you must wait for a visa number to become available for you after your immigration petition has been approved and before filing to adjust your status to permanent residence.

The annual numerical limits for 2013 fiscal year immigration visas are the following: