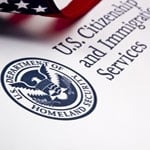 There are various issues related to immigration and there are different US government agencies that handle the administrative tasks related to US immigration. One specific agency is not assigned to deal with all immigration issues. If you are a person who is seeking to immigrate to the United States, seeking employment, or a US citizen who is planning to sponsor your relatives for permanent resident status in the United States, you will have to deal with more than one government agency in order to get what you want.

United States Citizenship and Immigration Services: USCIS which was formerly known as the INS, is the government agency that deals with the immigration and naturalization application processes. A US citizen wanting to  sponsor a family member or a US employer sponsoring an employee for permanent resident status in the United States must file an application with the USCIS. Filing an application with the USCIS is the first step in the process of getting a Green Card for a relative. USCIS deals with the application process for most non-immigrant visas. There are some other offices administered by the USCIS, such as, service centers, asylum offices, district offices, sub offices and application support centers.

US Customs and Border Protection: Customs and Border Protection is a large and complex department administered by the US Department of Homeland Security. The mission of this agency is to prevent the terrorists from entering the United States. It enforces US regulations along with enforcing drug and immigration laws. One of its duties include checking the paperwork when an immigrant enters the United States and it also makes sure that the visa is genuine.

Immigration and Customs Enforcement: This US agency is the main investigative branch under the US Department of Homeland security. It is also the federal government’s second largest investigative bureau. This agency promotes public safety by enforcing the civil and criminal federal laws. It governs immigration, customs and border control. ICE arrests undocumented immigrants and manages deportations.

The US Department of State: This agency is responsible to protect the lives of American citizens by strengthening the security of the borders of the United States. It is watchful in the adjudication of visas and passports. This agency also encourages international understanding. Department of State issues travel documents that allow the Americans to travel around the world. It permits lawful immigrants and tourists to travel to the United States. The US department of State works though the US consulates and embassies around the world. The embassies and consulates are responsible for conducting personal interviews when foreign nationals try to enter the United States, either on immigrant visas or on non-immigrant visas.

US Department of Labor: A labor certification will be required if a foreign national wishes to get employment opportunities in the United States. Foreign labor certification program is designed by the DoL to make sure that the foreign workers who are allowed to work in the United States on permanent or temporary basis will not affect the job opportunities of the American workers.