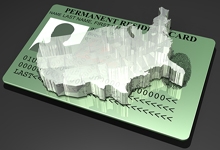 Visas are generally issued to individuals based on the purpose of their travel and the type of visa to be issued to an individual, is determined by the American immigration law. By obtaining an immigrant visa, you will be eligible to reside permanently in the United States and you can get a Green Card. You must also remember that a Green Card will not make you an American citizen; you will only be a lawful permanent resident of the United States. You may later become a US citizen after residing in the United States as a Green Card holder for 5 years or more. Your Green Card will also serve as a travel permit and you can travel with the Green Card across the US border, with few restrictions.

Applying for a Green Card involves a lot of paperwork followed by interviews. A criminal or a terrorist will not be allowed to immigrate to the United States. An immigrant will be questioned several times before being allowed to become a permanent resident of the United States. People entering into the United States through the US port of entry with an immigrant visa, will go through security checks and their baggage may be checked to make sure that no smuggling is done. Persons may not be granted entry into the United States if their answers are found to be untrue by the immigration officials. All the supporting documents will be verified. Immigrants need to make sure that they have all the required documentation and be ready to provide them when requested by the immigration officer at the US port of entry.