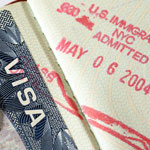 Green Card lottery is an attractive program through which a lot of new immigrants with lots of hopes are given chances to immigrate to the United States and become lawful permanent residents. Legal rights are granted to the winners of the DV lottery, if they satisfy all the eligibility requirements, for an immigrant visa. This program which was started in the 1990’s, allocates 50,000 immigrant visas to the DV lottery applicants who are selected by a computer generated random lottery.

Winning the lottery does not only provide an immigrant visa to live permanently in the United States, it also provides the winners with a lot of benefits. Though you cannot get a job in companies which hire only US citizens, you will be eligible to get an employment offer in other American companies. As you apply for an immigrant visa through the Green Card lottery program, you can include your eligible dependents in your entry and they can also get immigrant visas to immigrate permanently to the United States, if you win the lottery. A person who has no one in the United States to sponsor him can always choose the Diversity visa lottery program to get an opportunity to immigrate to America, provided that he is a native of an eligible country and he satisfies all the eligibility requirements.